In the serene outdoors in Black Forest, Jennifer Wolf talks a client through a therapy session. 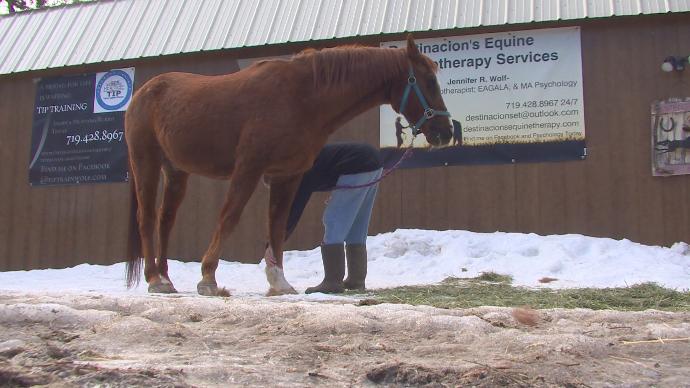 Wolf stands outside an enclosure while the client is inside with a beautiful, 28-year-old Polish Arab named Red.

She started Destinacion’s Equine Therapy in December after going back to school to get her master’s degree in psychology with a military specialization. She wanted to help others deal with trauma after she lost her husband in 2013.

“I kind of took a tragedy and tried to make the most of it, looking at veteran suicides, and those rates,” Wolf said. “I think it’s time for all hands on deck, really, for everybody to step out and do something about it.”

While Wolf is trained to help veterans and military families cope with trauma and tragedy, she’s open to helping anybody.

“I work with anybody ages five and up,” she said. “I do individual counseling, family, couples, and I have a couple support groups that are going to start running.”

Wolf said she started accepting clients in January and is hosting an open house Saturday to get the word out about equine therapy.

“It’s similar to having, kind of, a therapy animal,” she said. “The difference is that a horse is such a herd animal, and so their intuition is to really read you and understand, you know, ‘Are you feeling angry? I am reading that you’re feeling sad.’ So their ability to pick up our emotions is unlike anything we’ve seen with other animals.”

Wolf said the therapy sessions are typically 65 minutes long, but you won’t be getting on the horse and riding it.

“Everything we do is from the ground,” she said. “So it’s a very face-to-face type of psychological experience. And you kind of just use that horse as the metaphor for the things you need to move, and the obstacles and the relationships that we form every day with others, but we use the horse to do it.”

During the therapy session, Wolf said the focus is on the client and the horse.

“I spend a lot of time stepping back, watching what’s going on, observing, seeing where we can go from here and take what we have seen, but every session is such a powerful thing to watch,” she said. “You just watch the person melt into the horse and the horse kind of carries for them whatever is burdening them, whatever the processes are that they need that day, so it’s beautiful to watch.”

She said the name “Destinacion” comes from Red’s racetrack name.

“He’s just my heart worse. He does everything you ask of him all the time. He’s wonderful to me. He’s a wonderful therapist, so I knew always that it would be named after him,” Wolf said.

If you’re interested in learning more about Destinacion’s Equine Therapy, Wolf is hosting an open house on Saturday from 10:30 a.m. to noon at 8315 Lakeview Drive, Black Forest, CO 80908. You can also find more information on Wolf’s website.