Feed Bins are what Cryptohorse use to facilitate fund raising for individual horses and organisations involved in equine welfare or using horses for human therapy.

A Feed Bin can be created by a horse owner for any horse they have listed in the Therapy Horse Directory or the Racehorse Directory. In either case The owner will need to provide proof of ownership and current photos of the horse to allow identification.

A Feed Bin can also be created for a welfare organisation such as a registered charity. 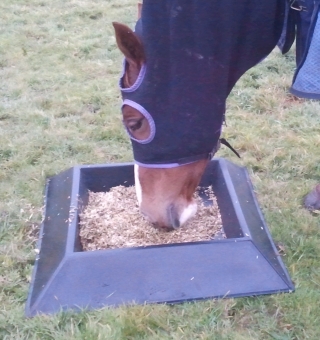 There is no charge to set up a Feed Bin. However Cryptohorse will receive 5% of each donation to a registered charity and 10% otherwise. This fee includes the 2-3% typically charged by payment gateways such as PayPal. A Feed Bin can have a fixed term but for most horses we expect that it's owner will want to encourage donations on a continuing basis.

Cryptohorse members who have created Feed Bins are free to promote them however they wish. Cryptohorse provides facilities for them to be featured in your Profile as well as links in your Organisation or Horse Directory listings.

This is to assure donors that the horse they are supporting is in good health and that it's owner is actively working with the horse. We expect that anyone asking for third party donations would be happy to provide such re-assurance.

Should the horse be sold, its donation history will be a matter of public record as per its Feed Bin. As the Feed Bin is held in trust for the horse it will be transferred to the horse's new owner subject to that person becoming a Cryptohorse member and the horse remaining on the Cryptohorse site. Should that not be the case the Feed Bin will become the Property of Cryptohorse and will be used to support other horses selected by us.

Horse owners can use its Feed Bin history to support an enhanced value for their horse upon sale. For instance the racing owners of a horse could put funds into its Feed Bin upon retirement and use that fact to encourage a good sale price or the right quality home for their horse. Cryptohorse offers a resource to assist such vendors to promote their horse within the site.